Design Through the Generations 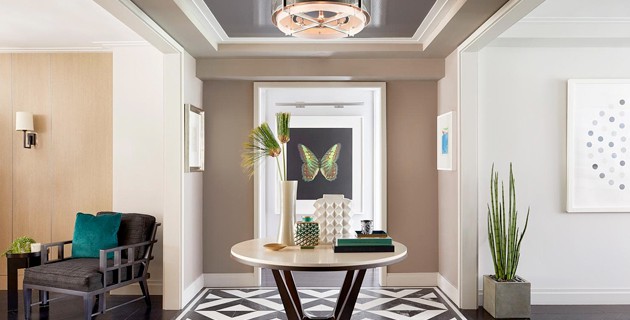 Lately, I've been thinking about how design changes across generations. Design and furniture trends are usually classified according to style or era, but rarely as per generation.

I'm fascinated by how design and furniture are shaped by each era's social, economic, and political zeitgeist and how the history of design affects our present design decisions and preferences. The image above features the entryway for a contemporary bachelor pad by NYC interior designer Darci Hether.

The space doubles-up as an art gallery and is designed with artistic touches like the high-gloss lacquered wallpaper on the ceiling, the metal light fixture, and the stone floor's inlay pattern. When I see a space with so many unique materials and finishes, I can't help but think about how different design styles and eras might have inspired the designer to create this space.

Inspired by this project, I have traced design trends across generations.

The Lost Generation (Before the 1920s)

The Lost Generation came into adulthood just after World War I, and the after-effects of war defined their lives. Disillusioned by the mass death and destruction caused by the war, this generation rejected old traditions and defined themselves by a more pleasure-seeking way of life. They were called the "lost" generation for that reason. Great poets like Ernest Hemingway, T. S. Eliot, Gertrude Stein, and F. Scott Fitzgerald became the voice of this generation. The design trends of this generation were self-indulgent and extravagant on the one hand, while owing to the scarcity and the loss that war creates, decor for the working class was frugal and careful.

F. Scott Fitzgerald's The Great Gatsby represented both these styles perfectly. On the one hand, lavish mansions with exquisite furniture, marble fountains, and crystal chandeliers showcased the over-indulgent mindset of that generation, and on the other hand, the middle-class in the story lived in tight apartments or row houses in the city.

The Greatest Generation was born when the Lost Generation was reaching adulthood, and this generation reached adulthood at the time of the Second World War. The late 1920s saw the maturity of major design movements like Art Deco and the Bauhaus School, these movements reached their peak with the Greatest Generation. The mood of this generation was affected greatly by WWII. While Art Deco originated in France with ornamental motifs and decorative details, the Bauhaus school, formed in Germany, was in complete contrast with a priority on functionalism and necessity — reflecting the different ideas and psyche of the people in Europe and later, in the States.

Art Deco began in the 1910s and reached maturity in the late 1920s, especially because of the Exposition Internationale des Arts Décoratifs et Industriels Modernes held in Paris in 1925. It was influenced by cubism and industrialism and became a major style movement in the States in the 1930s.

The Bauhaus school, founded by architect Walter Gropius, merged industrial elements with design and focused on functional aesthetics. Notable designers of the movement include Ludwig Mies van der Rohe, Marcel Breuer, and Wassily Kandinsky. While Art Deco was characterised by detailed geometrical work and ornamentation the Bauhaus movement was all about simple practicality and function.

The Silent Generation can be defined as people born in the late 1920s to the early 1940s, who reached adulthood in the 50s and 60s. This generation began the trend of moving away from the cities to the suburbs, getting bigger houses with split levels, and reinvented design styles. Scandinavian design was a crucial part of this movement — notable designers include Arne Jacobsen, Verner Panton, and Borge Mogensen. While modernist designs first emerged in the 1930s, they gained prominence in the Silent Generation. Scandinavian modernism is based on form and function that is affordable, which perfectly suited the Silent Generation. The affordability of these pieces made them available to all. This movement also saw a rise in the use of low-cost materials like form-pressed wood, plastics, aluminum, and pressed steel.

These three decades were all about rebellion, free love, and self-expression, and the movement was carried forward to interior design as well. The vibrant, psychedelic prints and patterns of the 60s were a big shift from the clean-lined forms of the 30s, 40s, and 50s. Upholstery and linen were covered in stripes and polka dots, and it was also common to see paisley, tye-dye, shaggy rugs, and metal accents in interior decor.

This excessive style reached its climax in the 80s with wildly colorful contrasts and clashing prints, as seen in the designs of the Memphis Group. The Baby Boomers weren't just all about psychedelic design either. Country French Decor and Arts & Crafts Furniture were also popular design trends for this generation. This excess of indulgence from the 60s to the 80s lead to another wave of minimalism and a clean-lined decor trend that's reminiscent of the Art Deco and Bauhaus schools — Mid-Century Modern.

Every generation tries its best to be the opposite of what preceded them. After three decades (60s-80s) of extravagance and vibrance in design, the 90s saw a return to minimalism, which gave rise to Mid-Century Modern. This style grew prominence in the States in the 1940s and 50s and then came back strong in the 90s. It's part of the American design vocabulary and continues to evolve. Notable designers of the movement include Tom Dixon and Mark Newson.

While furniture became minimal, interiors were all about open layout kitchens, spacious living rooms with home theaters, and modern accessories. Mid-Century Modern is still a prominent design style, but it's starting to evolve and change as Millennials and soon, Generation Z, are looking for design that's functional, durable, and sustainable.

This generation is all about sustainable, eco-friendly, zero-waste living. Furniture has earthy tones with recycled or upcycled materials being used often. They prefer a raw, fresh look and experiment with transitional styles often using an eclectic palette of color and furniture. The millennial home is a confluence of design that’s a result of globalisation and the world being made easily accessible through travel and technology.

This Generation, many of whom are now in their 20s, is adding a dash of Bohemian to Mid-Century Modern. The latter is more of an accent than the main design vocabulary. Designers and industry experts predict a preference for organic shapes and forms and a sustainable approach to interior design. Indoor plants and gardens may also become a common feature in the homes of the future. While the 90s were all about big living rooms and home theaters, the future might be more about individual spaces to reflect the way that we use technology. Is the future of design all about smaller, customized spaces?  We’ll find out soon enough.

Our taste in design is defined by the times we live in, best understood through the lens of the different generations. ♥

⇐ KID SPACES
Design Is Moving Outdoors in the Cold of Winter ⇒